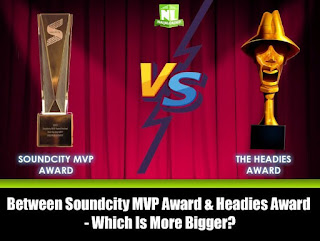 Hi Guys,
Something just happened right now at the Leadwaytunez HQ , Its our normal daily argument and today we have a very sensitive one for you.
We have two most notable award shows in the country namely; The Headies Award & The Soundcity MVP Award .

The Headies (originally called the Hip Hop World Awards) is a music awards show established in 2006 to recognize outstanding achievements on Nigerian acts.

Several artistes owe their landmark status and relevance on the music scene to the Headies Award.
Artistes like Wizkid, Davido ,
Omawunmi who have won the Next Rated Award have gone ahead to be successful and become global music superstars.

In the same vein, The Soundcity MVP Awards is highly regarded in the music industry also. Some view it as a much more credible award than The Headies.
Ever since its inception in 2016, it has held three editions. But just like The Headies Awards , it has also had its own controversies with people arguing the award organizers chose winners of some award categories wrongly.

These two awards are probably the two most prestigious award shows in the music industry filled with controversies, arguments and contentions on who deserves what.

We’ll like to hear your own view too.
Drop your comments..