Posted 03:38:00
Tags
News
Usain Bolt achieved “immortality” early this morning when he won his third gold medal of Rio 2016 – and his ninth overall – as he anchored the Jamaican 4x100m relay team to victory. 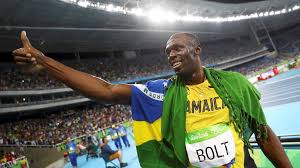 He adds the medal to the 100m and 200m golds he took earlier in the Games, just as he did in London and Beijing.Ably assisted by teammates Asafa Powell, Yohan Blake and Nickel Ashmeade, the world’s fastest man, who celebrates his 30th birthday on Sunday, stormed over the line in 37.27 seconds to trigger an eruption of adulation in the Olympic Stadium.Japan’s quartet took a surprise silver in 37.60 seconds while the United States claimed bronze in 37.62.