Obasanjo says movie is a mixture of sweet and sorrow

Posted 03:25:00
Tags
News
Ex-President Olusegun Obasanjo has commended the efforts of the producers of Nollywood movie, "76." 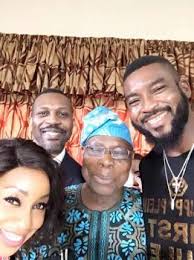 Ex-President Olusegun Obasanjo has described Izu Ojukwu's movie, "76" as “a mixture of sweet and sorrow.”

Obasanjo said this at a private screening of the movie at his Presidential Library in Abeokuta, Ogun State. 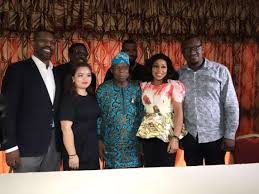 “It will make us remind ourselves not to go back to the dark days, which put us in go-no-go situation. We might not yet have lived up to our best, but we have lived through our worst," Obasanjo remarked.
Speaking further, he said: “We can have more of this, as there are more national issues that can be portrayed. We are capable of the best and that is what this film has shown.”
Obasanjo also commended the production team led by the Co-Executive Producer of the film, Prince Tonye Princewill, Rita Dominic, Izu Ojukwu and Chidi Mokeme.
“The youth of today need to have a sense of the past, we have no sense of history, hence the resolve to have the film ‘76”, Princewill said.
Princewill continued saying the visit to Obasanjo was important, “considering his position at that time in the country. He was there in the front row. We deemed it wise to come and show him the film and curry his esteemed endorsement, which as you can see we have just got."
Obasanjo joins other critical stakeholders like the Nigerian Army to support the innovative military thriller which depict events that took place before he became military Head of State in 1976 following the assassination of Gen. Murtala Mohammed.