Posted 05:32:00
Tags
Entertainment
News
What Five Star Music has to do is plain. They have all the funding and systems to make their material go pop. But the sound and content have been average at best, and needs to be stepped up. 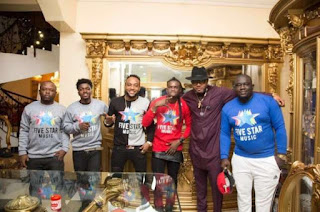 Five Star Music has to be the richest music house in the land. Not for their music, not for the strength of their revenue generation via music, but for the efforts of label CEO, E-Money. But what they have in abundance at the bank, they lack direly in terms of a clear strategy of making music.
A house which is generally not regarded as ‘serious’ within the music industry, the folks from Festac have a celebrated and powerful CEO with influence so long that it reaches into the pockets of many stars in the Nigerian music industry. But the music direction of the label is questionable, and the quality of music being made is of mediocre stock, (except for Harrysong).
Kcee leads this group as its frontline artiste. Of course he has to be. His brother is boss, and he has been in the game for many years, grinding to success as Kcee Presh, and branching out on his own to pursue a career. The singer hit the jackpot with the 2013 hits ‘Limpopo’, and ‘Pull over’ preceding the release of his solo debut album “Take Over”.  All efforts to present more singles from the project has failed to spark another hit. Last year had new tunes, but none made the hit list.
2016 has seen Kcee try his hands at new material. Highlife single ‘Bureau De Changer’ featured a slightly annoying bell that stands out as the highlight of a lukewarm effort. Another effort with Yemi Alade, ‘Correct’, sounds tired and with very little to savor. Mama Africa’s inclusion was not enough to save it. Right now in a bid to recapture the magic of ‘Limpopo’, he took the drum patterns and beat progression of the single, rinsed and shoe-horned it again as ‘Tinana’. Check out the mnemonic and syllabic similarities between both titles: Limpopo (three syllables) and Tinana (3 syllables).
The video of the new single, of course, is expensive and ticking all the boxes for the stereotype. Exotic location, check. Beach, check. Pretty model, check. Kcee in bright colours, super check.
Skiibi. A man more famous for pulling a Jesus Christ, when he died and rose again from the dead. Skiibi has continued his efforts in relative obscurity. Singles ‘Sampu’ (which was released conveniently around his time of death), and ‘Aye mi’ have also failed to pop.
Harrysong remains the only Five Star man with clear music aptitude. He stands out from the group as a titan, choosing to drop pop hit songs. 2015 had him thrilling the country with‘Reggae Blues’, a song nominated in many quarters as the biggest single of that calendar year. 2016 has seen the singer selflessly give guest handouts to his struggling label mates Kcee and Skiibii on ‘Baba for the girls’ and ‘ladder’. His digitally successful ‘Mandela’ single got a remix with South African rapper Emtee. A renowned music maker with an ear for a killer melody and songwriting, he continues to be the shining light.
Xbusta the new signee from the East? Not much to see here. A new single, and nothing else.
Five Star Music’s music malaise comes from the producers they have trusted with their sound direction. Dr Amir is a trusted hand who has long credits for a tremendous amounts of pop songs in the music industry. But his work with his label mates is inconsistent. Mystro, another go-to guy, has failed to shoot a live one, only scoring anything of note when he did a ‘Jantamanta’rip-off for ‘Ebeano’. Loyalty is no issue where the label is concerned, but a heavy reliance on these producers have not yielded enough to properly cement this as a winning combination. Where he comes good, he shines. But for the most part, the singles have lacked a killer production. Perhaps a new hand? Maybe a switch in direction? Dr Amir and Mystro need to come good.
What Five Star Music has to do is plain. They have all the funding and systems to make their material go pop. But the sound and content have been average at best, and needs to be stepped up. They still have the final quarter of 2016 to go out with a bang. It’s crunch time.