Posted 07:00:00
Tags
News
Fani-Kayode made the comment following the sealing off of the proposed venue of the PDP convention in Port Harcourt, Rivers State. 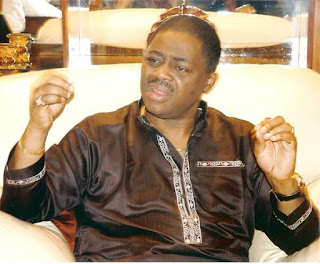 Former aviation minister, Femi Fani-Kayode has said that factional Peoples Democratic Party (PDP) chairman, Ali Modu Sheriff is working for President Muhammadu Buhari.
Fani-Kayode made the comment following the sealing off of the proposed venue of the PDP convention in Port Harcourt, Rivers State.
PDP members had to gather at the Government House today, August 17, 2016, after security officials blocked access to Sharks Stadium, where the convention was to hold.
Fani-Kayode reacted to the incident via a post on his Facebook page. He said:
“When I warned our people about Buhari and what he would do with power no-one listened. When I warned PDP Nigeria and particularly our PDP governors about the dangers of making Ali Modu Sheriff National Chairman they would not listen. I also told them that the government would NOT allow the convention to hold because Sheriff is working for them."
“Now look at what they are doing in PH in collusion with some corrupt judges just to destabilise, destroy and silence the opposition. Governors put under house arrest. Convention venue sealed off. It is shameful. Let me make another prediction: this is just the beginning of their tyranny. It will get far worse.”
Meanwhile, the PDP has postponed the convention and extended the tenure of the Ahmed Makarfi-led caretaker committee by one year.
The crisis in the PDP began on May 21 when it attempted to remove Sheriff from the position of chairman at an earlier convention which also held in Rivers.